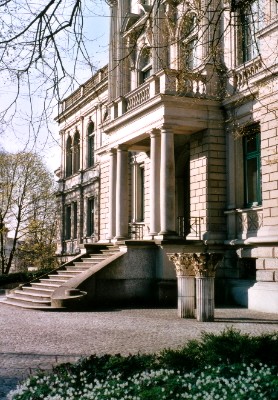 Archaeology studies the materially and visually determinable culture of those who lived in the past. As a discipline, "Classical Archaeology" specializes within this broad field on ancient Greek, Etruscan, and Roman times. Its aim is to place the surviving evidence of these times into a cultural and historical context, and thus to give us a greater understanding of our own culture.

It covers the entire geographical spread of these cultures at the various ages of history: Primarily what are now Greece, Italy and Turkey, but also the entire Mediterranean region and, at times, other parts of the Near East and Europe. The period studied ranges from the Bronze Age (3,000 – 2,000 BC) in Greece to Late Antiquity (400 – 500 AD). The subjects covered encompass the full spectrum of material witness to the past: Settlements and the environment, buildings and graves, with their furnishings, finds associated with social life and religious cults, and works of fine art.

The Division's library currently holds some 75,000 books on Greek, Etruscan and Roman archaeology and related disciplines, including several hundred Swiss and foreign periodicals. The library's catalog can be accessed via the search portal for all of the University of Zurich's libraries.

At the University of Zurich we teach the core fields of Greek and Roman archaeology. A further area of emphasis – and one less commonly found at German-speaking universities – is Etruscan archaeology. Everyday student life includes field trips to museums and archaeological sites in Switzerland and abroad, and students are involved in ongoing excavations at an early stage. With the Department's own museum of antiquities and a comprehensive collection of plaster casts of ancient sculptures, Zurich is the perfect location for practical training with hands-on experience.

Classical archeology can be studied at bachelor's and master's level as either a major or minor subject.

The University of Zurich Classical Archaeology Division has been conducting excavations on Monte Iato, in the province of Palermo on Sicily, since 1971.

The site is approximately 30 kilometers by car south-west of Palermo, above the towns of San Cipirello and San Giuseppe Iato. Having been occupied for a long period, Monte Iato is one of the most interesting sites in western Sicily. The town that is being excavated was known as IAITAS in Greek and IETAS in its Latin form, with the GIATO form of the name used in the Middle Ages. Annual digs are held each June.

Outside of Etruscology, Spina is known in archaeological research first and foremost for the enormous number of Attic ceramics discovered during excavations in the Valle Trebba and Valle Pega in 1922–1935 and 1954–1965. Richly decorated with figures depicting everyday and mythical scenes, many are of a very high quality. They were included by J. D. Beazley in his corpora on ancient vases.

The research project being undertaken by the Classical Archaeology Division at the University of Zurich began in 2008. It is being run in cooperation with the Soprintendenza per i beni archeologici dell’Emilia Romagna in Bologna, with financial support from the Fritz Thyssen Foundation in Cologne and from the University of Zurich. Its aim is to remedy the lack of established archaeological fact about the ancient city, and to answer questions about how it was laid out and how dwellings were constructed, as well as about the city's chronology.

The Archaeological Collection is closed for renovation until approximately spring 2022.